There’s a lot of talk about the future of customer service these days, with social media driving much of the conversation: Customer service is the “new marketing”. It’s a major driver of a great (or lousy) customer experience. Millennials are demanding more of it, but on their terms. It’s vastly underfunded when compared with marketing spend.
In addition, Jay Baer – previously a well-known marketing guy – taught us to “Hug Your Haters” in his fantastic new book of the same name, while Social Media Marketing World – clearly a marketing conference given the name – included a Customer Service track for the first time this year after featuring Baer and fellow customer service guru John DiJulius in keynotes last year.
It’s not just all talk, either. Brands have (mostly) figured out that they need to offer customer service on social media, with some of the best being featured on the Focus on Customer Service Podcast hosted by me and Dan Moriarty.
On a recent podcast episode, we interviewed Conversocial CEO Joshua March who said that messaging apps like Facebook Messenger, WhatsApp, Snapchat and WeChat in China are “the future of customer service”. His argument was that messaging apps have two main advantages over “traditional” social media: they’re private (which brands love because it keeps complaints out of the public eye) and they’re persistent (which customers love because they don’t have to repeat their problem or even their account information to multiple agents). 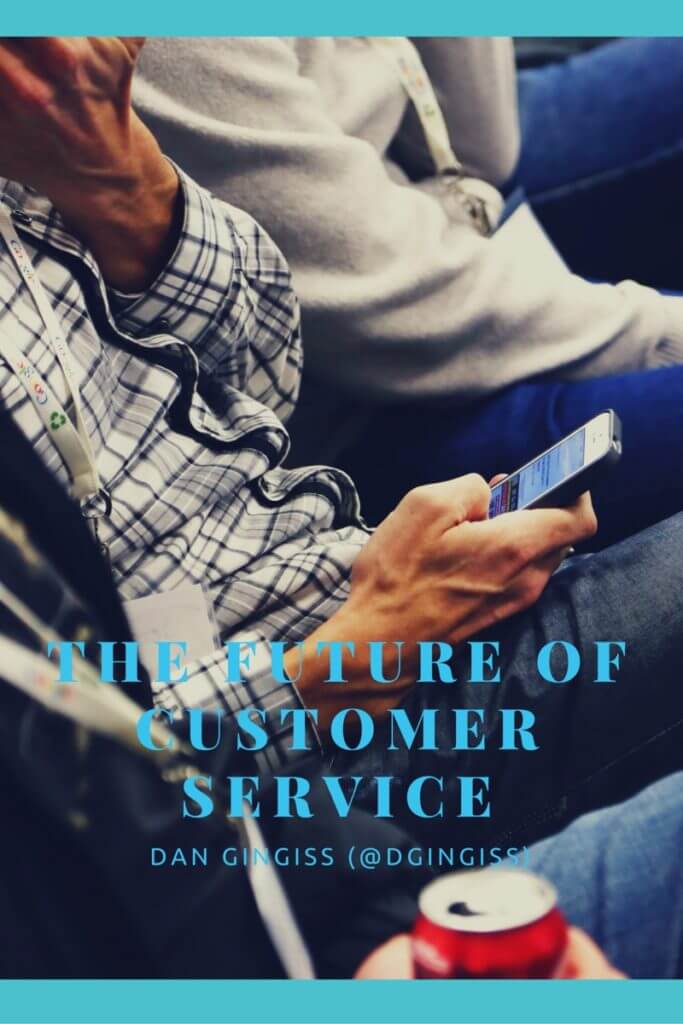 But are messaging apps really “the future of customer service”? The boldness of that statement stuck with me, and I immediately wondered whether all the work brands have done to become good at customer service in other channels might end up for naught if March’s prediction comes true.
That’s not what he was saying, of course, but I could almost hear the collective anxiety/anticipation/gasping of brands saying, “Darn it, we finally figured out this social customer care thing and now we have to pivot again to private messaging?”
The reality, though, is that many brands are already doing private messaging – in the form of click-to-chat on their website or mobile app. So maybe Messenger and WhatsApp are just extensions of that, but meeting customers where they are instead of waiting for them to come to us. And click-to-chat generally gets higher customer experience ratings from customers than other channels.
Another key benefit of messaging apps is that they eliminate the asynchronous back-and-forth of e-mail or social media and replace it with real-time resolution. So as 24-hour response times in e-mail have given way to an hour or, if you’re best-in-class, less than 15 minutes in social media, messaging apps essentially bring that time down to nearly zero. This is a great experience for customers.
From a technology perspective, too, the proliferation of multiple messaging apps should not cause more complexity for brands. “I think the nice thing around messaging platforms is that you can be pretty consistent in how you’re responding to customers,” says March, comparing messaging to the various nuances of Twitter and Facebook – character lengths, hashtags, response times, etc.
So messaging apps have a lot of advantages. But if they end up not being the future of customer service, what then? Bots? Hopefully not, as that would definitely unravel most of the progress brands have made in the past few years. They can be used for basic interactions, but they can never replace the human touch.
“We are not at the stage yet where you can have a really comprehensive chat bot that would work for customer service,” says March. Ironically, computer-generated chat sessions have been tried before too. “The customer experience was negative,” March says, “and so customers would end up phoning or e-mailing instead.”
Online communities? They’ve been around for decades, but only a few brands (Intuit comes to mind) have really changed customer behavior enough to drastically change the cost equation. March does say that a few brands are testing the integration of social media and online communities, allowing so-called “experts” to answer customers’ questions on social media rather than the brand. This definitely has potential in the future if it can be effectively scaled.
I think the true answer to the question is that the customer service pie is expanding. Customers now have far more options to complain/compliment/ask questions than ever before, and their clear expectation is that brands will answer their questions wherever and whenever they are asked. As March notes in the podcast, social media has created a “huge change in how people are communicating with each other”.
The good news for brands is that channels like Twitter offer lower-cost alternatives to traditional customer service channels like the telephone, and that customers are willing to spend more with brands who respond to customer service inquiries on Twitter. And with both Twitter and Facebook investing heavily in customer service functionality, the brand and customer experience on both is only getting better.
But most brands that we’ve interviewed aren’t seeing drastic reductions in customer service phone calls; in fact, for many companies social media is still a tiny fraction of overall customer service inquiries.
Yes, millennials and their general distaste for the telephone and email may eventually move the needle toward social channels, but for now those two old “distasteful” channels are still by far the biggest for many brands. This is why the customer service pie must be expanding – there are so many new ways for customers to connect with brands today, yet the old-fashioned channels still remain incredibly popular. One big difference is that customers are now bringing up issues, providing feedback or asking questions that they never would have previously, in part because it’s so much easier to do so. In the past, customers called brands only when they were having problems. Today, they desire a personalized relationship with a brand even before they buy, and once they become a customer they want their ideas and suggestions to be heard. Smart brands seize the inherent opportunity in this change by using that feedback to continuously improve their products and experience.
Ultimately, it’s going to be the customer that drives change; brands will just have to go along for the ride. “If you don’t remember what the customer wants, they’re only a click away from ranting about it, tweeting about it publicly or phoning you and increasing your expense,” March warns. In other words, deliver a great experience digitally or it’s back to the old-fashioned way.
Share This: